We aim to preserve and maintain trees, not carrying out unnecessary work that may reduce the trees long-term viability. Our work is highly professional with attention to detail and carried out by friendly staff. We offer excellent value for money with competitive rates for all operations. Services are listed below with a brief description. 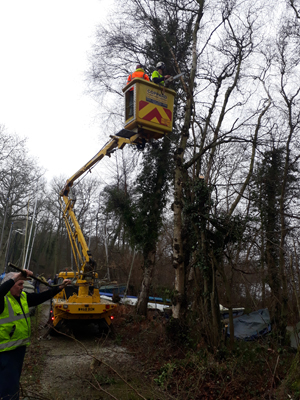 A Crown Thin involves the selective removal of a proportion of a trees secondary branches. Within the context of an ornamental garden then dead, diseased and crossing and weak branches are removed as a priority. It should be noted that within a woodland context deadwood is an important habitat for a large number of organisms in the ecosystem in which the tree lives.

The aim of thinning is to produce a crown with a uniform branch structure without altering the overall size or shape of the tree.

The density of the crown is reduced thus reducing the shading effect of the tree. The potential for damaging wind loading on branches is also reduced. This known as the “sail-effect.”

It is important to limit the amount of foliage removed each time a tree is thinned to no more than 25% of the leaf area, and ideally between 10-20% according to the management objectives. The size of branches removed should also be specified and in most cases limited to diameter of between 3-5cm.